Rumors of Coinbase having a liquidity crisis have been refuting by the community as outflows vary in a nervous crypto market.Rumors surfaced Friday night that Coinbase could face liquidity issues following leaked emails stating that it would suspend its affiliate program.

Business Insider reported that they received emails stating; “This has not been an easy decision, nor was it made lightly, but, due to crypto market conditions and the outlook for the remainder of 2022, Coinbase is unable to continue supporting incentivized traffic to its platform.”

Some took to Twitter to claim the decision was indicative of liquidity problems for the top US exchange. Kurt Wuckert Jr of CoinGeek tweeted that the suspension of the affiliate program, in combination with other decisions made by Coinbase over the past several weeks, signifies a “liquidity crisis” is looming.

On July 15, around 50% of stablecoins on Coinbase Pro left the exchange, according to on-chain data from CryptoQuant; the total value came to approximately $248 million.

The percentage stablecoin outflow was significantly higher on Coinbase than on other exchanges such as Binance. Only around 1% of stablecoin reserves left Binance over the same period, but the tokens had a similar value at just under $300 million.

When the value of stablecoins on the two exchanges is compared, the reduction in stablecoins held on Coinbase contrasts with Binance.Stablecoins peaked at around $1.2 billion on Coinbase in January 2022, but now the value stands at just $284 million. On Binance, the value remains in an upward trend since 2019.

The data paints a less drastic but still worrying picture when comparing the Bitcoin held on each exchange. Coinbase has seen a steady decline in Bitcoin in its reserves, while Binance has been increasing during the same period.

When all exchanges tracked by CryptoQuant are included, the Coinbase graph appears to follow the overall industry trend. The downtrend in Bitcoin held on Coinbase may simply be following the increased popularity of having crypto in non-custodial (unhosted) wallets. 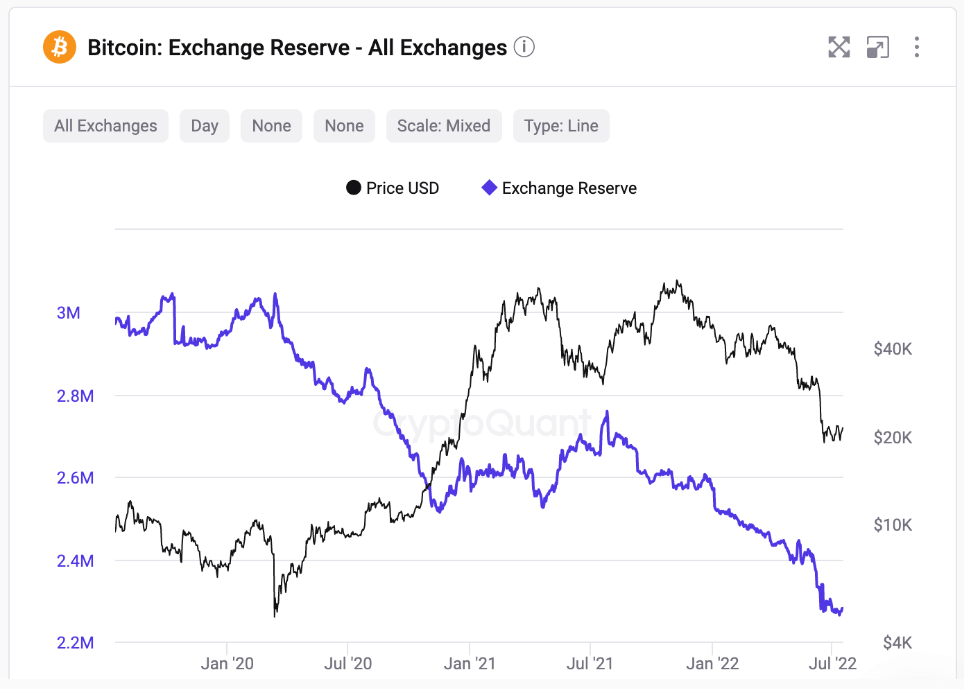 Amid rumors of a crisis at Coinbase, several industry professionals have called out those suggesting the exchange is in trouble. Kraken’s Dan Held tweeted, “Coinbase doesn’t have a liquidity crisis,” while the developer responsible for the Coinbase affiliate program, NJ Skobene, confirmed the program’s removal was not a warning sign. 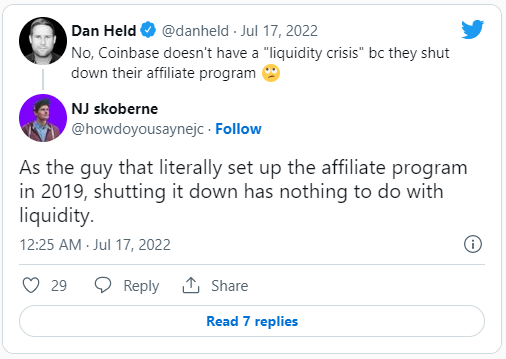 Jungle Inc, a crypto YouTube also tweeted that Coinbase has “$6 billion in cash” and sizable crypto reserves. However, his confidence started and ended in the same post as he confirmed he had removed all funds from the exchange. The risk of holding on exchanges may appear heightened after Voyager and Celsius already went into bankruptcy this year. 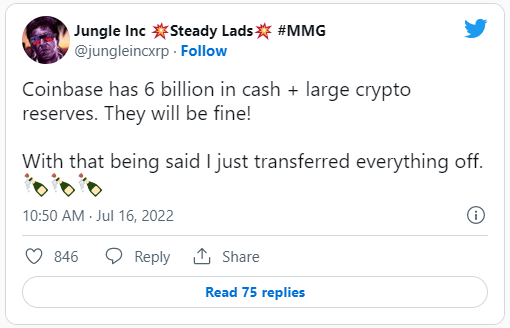 On July 12, Brian Armstrong, Co-Founder of Coinbase, tweeted that the company is “still adjusting” to the growth it obtained in 2021. Will this growth lead to the downfall of one of the world’s most trusted exchanges? If it did, it would undoubtedly have a knock-on effect on the rest of the industry. Currently, Coinbase’s cost-cutting strategies do not seem extreme, given the drop in the price of Bitcoin since January. 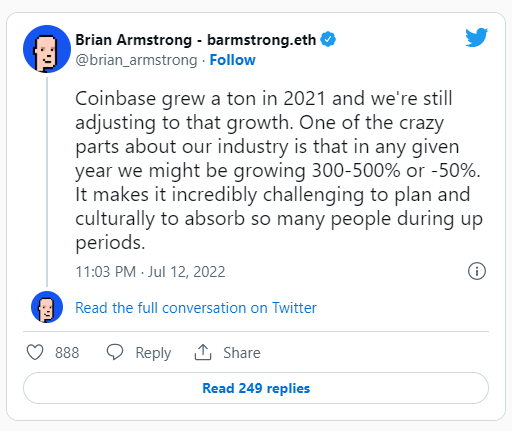 Coinbase grew a ton in 2021 and we're still adjusting to that growth. One of the crazy parts about our industry is that in any given year we might be growing 300-500% or -50%. It makes it incredibly challenging to plan and culturally to absorb so many people during up periods. - cryptoslate