(Reuters) - Bitcoin hit its highest in two weeks on Saturday, extending the previous session's substantial gains as cryptocurrencies basked in recovery in risk appetite and a rally in stock markets.

Ether, the coin linked to the Ethereum blockchain network, scaled the $3,000 level for the first time since Jan 21.

Friday's 11%-plus was the biggest single-day gain for bitcoin since mid-June and the first significant bounce after weeks of being roiled, along with technology and growth stocks, by fears of faster-than-expected Fed rate hikes to curb a surge in inflation.

It came alongside a rally in U.S. stocks. The tech-heavy Nasdaq (.IXIC) ended the week with gains despite the heavy volatility from earnings, including Amazon's robust growth and Facebook-owner Meta Platforms Inc's (FB.O) disappointing results.

Those synchronized moves showed how bitcoin has become far more of a mainstream asset, jolted by swings in risk appetite.

"The current panic and volatility surrounding bitcoin are based on a fundamental misunderstanding of it as an asset class," said Ed Hindi, a chief investment officer of Swiss-based cryptocurrency hedgefund Tyr Capital.

"When valuations on the Nasdaq fall, misguided institutional investors start liquidating bitcoin positions en-masse as if it were a tech stock." 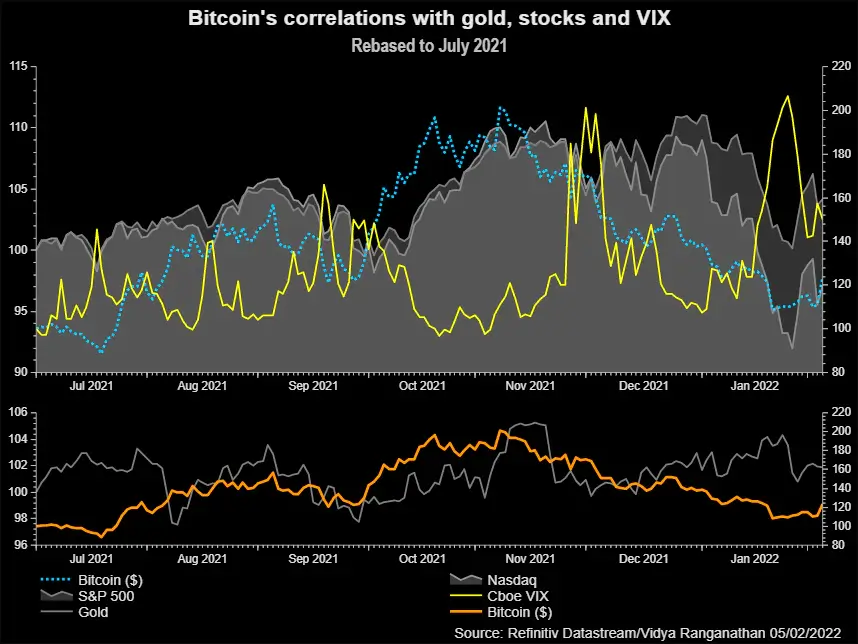 On Friday, the recovery in stocks boosted other listed crypto assets, with miner Riot Blockchain (RIOT.O) getting a bump after declaring bitcoin production more than doubled in January from a year earlier.